Choose Your Weapon Dice Shirt from $23.00

Vaporstation Sweatshirt See it to Believe It

Everything We Know About Sons of the Forest With the recent news that Sons of the Forest will, after many delays, finally releasing later this month, (as an Early Access title rather than a finished product), players can rest assured that the content currently planned for inclusion in the initial release is only the beginning. The development team over at Endnight have referred to Sons of the Forest as:

Welcome to the latest edition of the Giant Bomb Community Spotlight! I, @zombiepie, am once again honored to be your host as we look back at the best community-created works from the past week. This week seemed to be the week when everyone announced the shuttering of their multiplayer battle royale and/or live service games, but there's plenty to discuss about the site and its incredibly active community.

The site recently debuted a new video player and the site would like your help in ironing out any bugs or site issues! Get the details on what this means, and feel free to share your input in the thread. Some features, such as the Embiggen™ option, are still being reworked, so don't assume that the loss of certain features or options are permanently gone.

Likewise, if you are experiencing issues with the site API, we have a new bug reporting thread for that as well.

The debut of this new video player coincided with other production issues and hiccups throughout the week. Video and audio versions of the latest Power Bombcast should be fixed. Titling and description issues with Game Mess Mornings as well as GMM being broken in the RSS feed should no longer be an issue. With all of this in mind, send some good feelings and thanks to Jan.

Finally, a lot of y'all have been asking about the state of Arcade Pit on the site. The feature has not been cancelled, but will no longer be a weekly feature due to logistical reasons. Additionally, Smight has been dealing with health issues, though they are on the mend. As Rorie states in the linked thread, this was not an economical decision and if you enjoy Arcade Pit, consider checking out their Sunday show.

Sneak peek at the Final Level of #RyckertsIsland. Get to the top of @DanRyckert's Sky Fortress and stop him before he can start a 5000-turn game of Mario Party. Godspeed, Mario. pic.twitter.com/kAIlvVcyrO

I'm very sorry @jeffgrubb but it just hit me who you remind me of with your haircut short. Kubiak from Parker Lewis Can't Lose. pic.twitter.com/Di57BEiV0s

Do you know who needs to be in the new Smash game? Kidd Thunder from Mortal Kombat II! pic.twitter.com/mYQ8lAfmEK

Rewatching the @LeagueOfHeels events starting with the first PAX Rumble in 2014 and this was a fun sign in the crowd in support of @MrPope.

I was surprised to see a prize that @alex_navarro got for winning was passes to any Disney park from @JohnVignocchi. pic.twitter.com/KI2RVzgt75

The next pick for the Giant Bomb Community Game Pass Game Club is The Legend of Tianding! If you have any early impressions of how this side-scrolling 2D platformer adapts the 18th century folk tale hero, click the first link!

Additionally, the club has opened its discussion to Tinykin to story and SPOILER talk! What did you think of the game's story and ending? Do you feel the last levels used its mechanics well?

Transient by Gaelle is the latest pick for the Giant Bomb Community Album Club! Some in the Album Club consider this a "buried treasure" in the world of music, but you can share what you think by dropping a comment and joining the fun!

Far Cry Primal Was Such A Missed Opportunity +

Far Cry 3: Blood Dragon Is Like An NES Game Crossed With Time Cop In An FPS Form. Glorious. +

I Started 2023 With Grand Intentions Of Finishing Up Long Backlog Games. Instead I Spent January Playing Smaller Stuff (By: @bigsocrates)

bigsocrates made a big return to blogging on Giant Bomb this week and everything they posted on the site is definitely worth a read. Don't ask why, but they ended up completing Far Cry: Primal and now consider it the biggest missed opportunity in the Far Cry franchise.

Lastly, they penned a quick blog on how they ended up playing a bunch of smaller stuff to cap off the end of January.

Likewise, Beacon Pines and Chained Echoes are the games Mento played for their FINAL "Go! Go! GOTY! 2022" blog! Whether you are a fan of the games from Hiding Spot and Matthias Linda, or were a fan of Mento's consistent coverage of 2022 releases on the site, drop a comment.

Finally, Mento capped last week off with their usual "Indie Game of the Week". This time, the topic is the recent cult-classic, Bugsnax! Read to find out what Mento thought of the game's twists and turns and Pokémon Snap-inspired gameplay.

brian_ continues to plug away at their video game backlog! Get an exhaustive rundown of what they managed to play last month, which included Cook, Serve, Delicious!, Super Punch-Out!!, and Pac-Man 2: The New Adventures.

borgmaster continues their quest to play every PS1 game in order! This time, they checked out World Cup Golf: Professional Edition, The Chessmaster 3-D, Assault Rigs, and D!

Return to Monkey Island is the topic of imunbeatable80's latest "What's the Greatest Video Game" blog! How does the game compare to previous adventure games they have played and does it honor their memories of the series?

Finishing Lightning Returns: Final Fantasy XIII [Part 2] - Who Do We All Have At Least One "Messy Game" We Love? (By: @zombiepie)

ZombiePie has the second episode of their retrospective on Lightning Returns: Final Fantasy XIII on Giant Bomb! Read why they love it despite its problems and why they've been thinking about Kevin VanOrd's negative review for it. Also, this blog talks about THAT DOG AND THAT CAIUS BATTLE!

The Name is Snake, Solid Snake (By: @infantpipoc)

Did you know Raymond Benson, the author behind the adult James Bond novels from 1997 to 2003, penned the official novelization of Metal Gear Solid? Well, infantpipoc has a book report on the book you might want to give a read!

This week was not kind to the people working at EA, and news that a Apex/Titanfall game has been canceled definitely did not help. Does this all but guarantee there will never be a Titanfall 3?

Don't call it a comeback... because it likely won't be. Reports are suggesting Microsoft, Sony, and Nintendo do not plan to attend the revival of in-person E3 this summer. Is this finally the end for the convention?

Rumbleverse Is Yet Another Live Services Game Dying In Under A Year (By: @bigsocrates)

Many are still processing the announcement that Epic will be shutting down Rumbleverse. Were you a fan of the game? Feel free to share your favorite memories playing the game and join the community discussion by clicking the link and joining the conversation.

Knockout City is another multiplayer-based game that is shutting down this year. Who here has fond memories or experiences with the arena-based multiplayer dodgeball game?

One More For The Week - CrossfireX Ending It's Services In May (By: @glots)

CrossfireX is yet another multiplayer-focused game that is ending its services this year! How many of you were aware of this game before this announcement? Did any of you check out the story mode made by Remedy?

Hi Fi Rush Isn't A "B Game" And The Devs Seem Tired Of Hearing That It Is... (By: @topcyclist)

The developers of Hi-Fi Rush have expressed dissatisfaction with their game being labeled as a "B Tier" title. However, others feel it is entirely justified and appropriate given the game's scope. Share your thoughts in this thread!

The PlayStation Plus Collection Is Going Away May 9th (By: @abs_b)

Sony has announced the PlayStation Plus Collection is being retired this year. These "free" PS4 classics were offered to anyone who had purchased a PS5. Are you surprised by this announcement? Are you upset or did you always view it as a fun temporary program?

Are You Using PlayStation Stars (By: @spacemanspiff00)

Speaking of Sony platform programs, how many of y'all participate in PlayStation Stars? For those of you that do, are your experiences positive or negative? How many of know nothing about it? Click the link above to share!

Disgaea 7 has a confirmed release date and is even slated to hit Steam! Are there any fans excited about the news? For example, sparky_buzzsaw, who is a massive fan of the series, had this to say!

The next installment of The Crew has been announced! With The Crew Motorfest, the series is heading to Hawaii, and you can catch the reveal trailer in the linked discussion thread.

MelodicVirus decided to annotate the five games that they LOVE that they think are underrated by everyone else in the gaming hobby. Give their list a read and consider making a similar list of your own.

The Movie Tie-in Video Games That Don't Suck (By: @captainofthestars)

captainofthestars decided to have a hand at tackling the reputation that movie tie-in video games are universally bad with this list by looking at twenty-two games they personally enjoy playing that are based on or tied to movies.

InfiniteSpark finally got around to writing a 2022 GOTY list on the site and, as you can see, from this screencap, they put a lot of time and effort into this list. Also, I am still more than happy to promote any belated GOTY lists you make.

Wiki Page Of The Week

With the prospect of a new proper numbered Titanfall game looking grim, let's throw things back to the game that started it all for the franchise and Apex Legends. That's right, this week's wiki page of the week is for the original Titanfall! 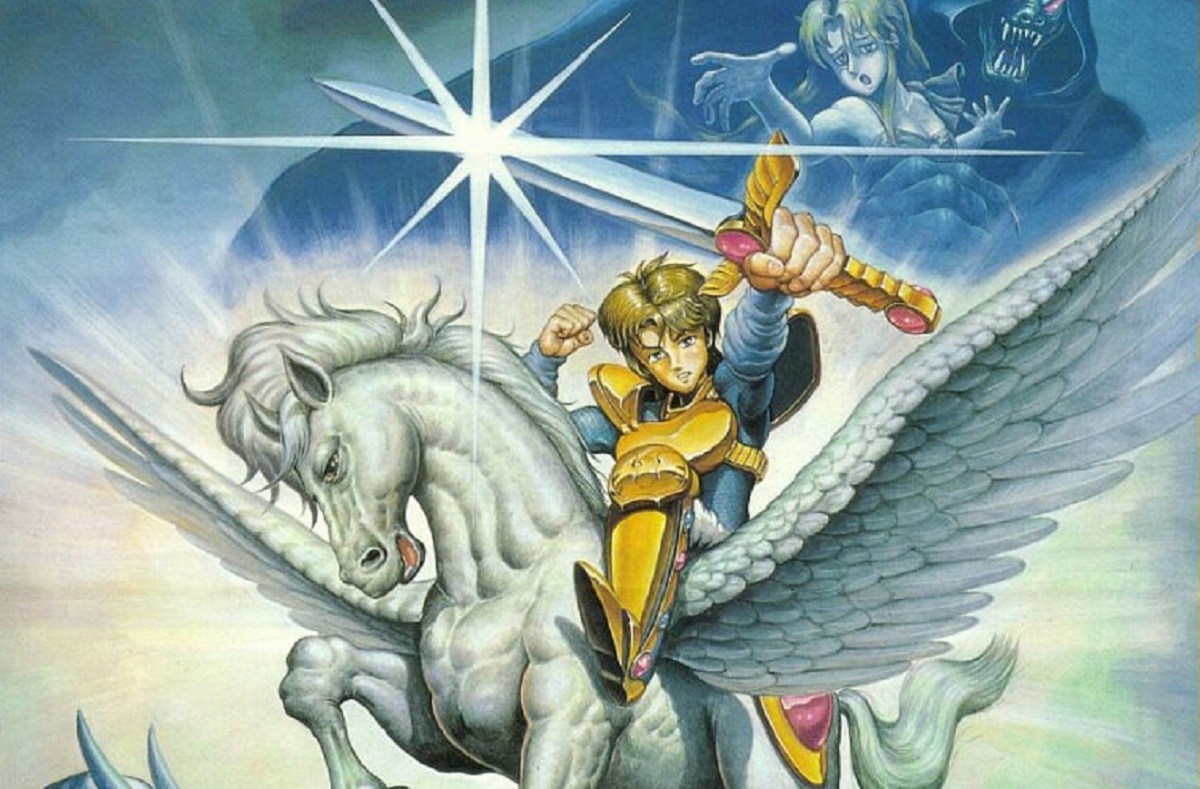 It's all Greek to me

A pretty special shmup release has joined the ranks of Hamster's Arcade Archives this week, as Namco's mythological and controversial blaster Phelios is now available to download on PS4 and Nintendo Switch.

Released to the Japanese arcade market in 1989, before later being ported to the Sega Mega Drive, Phelios is a vertically-scrolling shmup that is (very loosely) patterned...