3D Monster Maze is 16K of pure nightmare fuel, but what creeps you out in gaming?

Halloween is upon us. It's that time of year where kids roam the street looking for candy, Michael Myers stands in people's laundry lines, and tabloids print stories about LSD-laced sweets and razor-blade filled apples that probably never actually happened.

Video games are also getting into the Halloween mood, with numerous titles running in-game events, or adding horror-themed loot, gear, and other aesthetics to celebrate the spoopy season. Horror and video games have always been a match made in hell (and, conveniently, a license to print money). There's a reason Capcom keep churning out Resident Evil games and why Five Nights at Freddy's fast became a household name; We have a morbid fascination with fear.

But all horror titles, old and new, tip their hat to a game released on the humble ZX81. That game is 3D Monster Maze. Developed in 1981 by the team of J.K. Greye and Malcom Evans, 3D Monster Maze has the player guide themselves silently through a first-person labyrinth, procedurally-generated back before that was even a term. There is only one other inhabitant, a hungry Tyrannosaurus Rex, stomping around the maze in real-time. It is the sole goal of the player to escape the maze before they become carnivore chow, a task deceptively simple in its intensity. 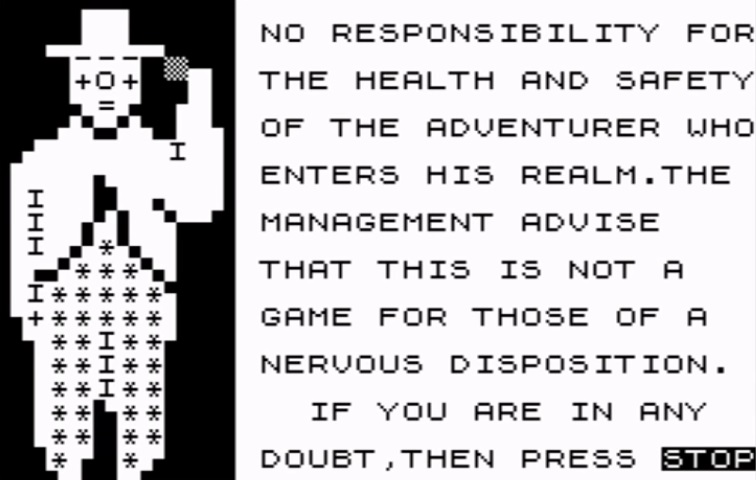 Arguably the first ever survival horror title, 3DMM is overwhelmingly creepy, and in '81, it was practically coronary-inducing. The stark, blocky, black-and-white visuals somehow make the game more frightening, like a "cursed-game creepypasta" that actually existed. The whole concept of first-person games were at such an infancy, that slowly and tentatively turning a corner, just to see the T-Rex barrelling toward you was genuinely terrifying.

The game itself builds tension will simple on-screen statements like "Footsteps approaching" and the dreaded "RUN! He is behind you". 3D Monster Maze even opens with ominous warnings that the game is not for those of a nervous disposition, before giving the player one last chance to back out rather than face the fearful maze. That's showmanship that would make P.T. Barnum proud.

Should the player evade Rex and make it to the exit, they are treated with a kaleidoscope of letters and warned that "Rex is very angry", before being transported to a new maze with a faster monster. All of this terror and technology was somehow crammed into 16K of memory. 16K! The header image of this article is three times that.

The horror games of today - particularly the glut of PC first-person jump scare titles -  owe a debt of gratitude to J.K Greye, Malcolm Evans and 3D Monster Maze. This simple little game was way ahead of its time and, regardless of its rudimentary design, still somehow manages to maintain a creepy air of unease, because of, not in spite of, its rudimentary visuals.