Arriving Friday this week, Ubisoft's latest installment of Assassin's Creed title, Assassin's Creed Odyssey comes in four different editions. In fact, the two priciest editions will come with early access on Tuesday, October 2nd - a full 3 days before the official release date. Before you scoff at the early-access-only-for-expensive-edition schemes, the concept has been proven to work, what with Shadow of the Tomb Raider Croft Edition (the only version getting early access) being the top seller on Steam Store the full week before the official release date.

Thankfully, list price aside, we've found plenty of decent savings on Assassin's Creed Odyssey so if you're looking for the best and cheapest deal on release week, you're at the right place. Below, you'll find discounts at up to 20% off for the PC Uplay digital copy, while console copies can still reap a $10 rewards certificate bonus.

As of writing, pre-load has already started for the PC version of Assassin's Creed Odyssey. Both digital retailers listed below are sending out Uplay keys immediately after purchase.

Note: Gold and Ultimate Editions listed below has an early access release date of Tuesday, 10/02/18, while all other editions are Friday, 10/05/18.

Note: Best Buy pre-order $10 rewards certificate bonus offer is available until 5 PM central time the day before the street date (10/05/18). If you order it past the cut-off time, YMMV on receiving the $10 bonus. 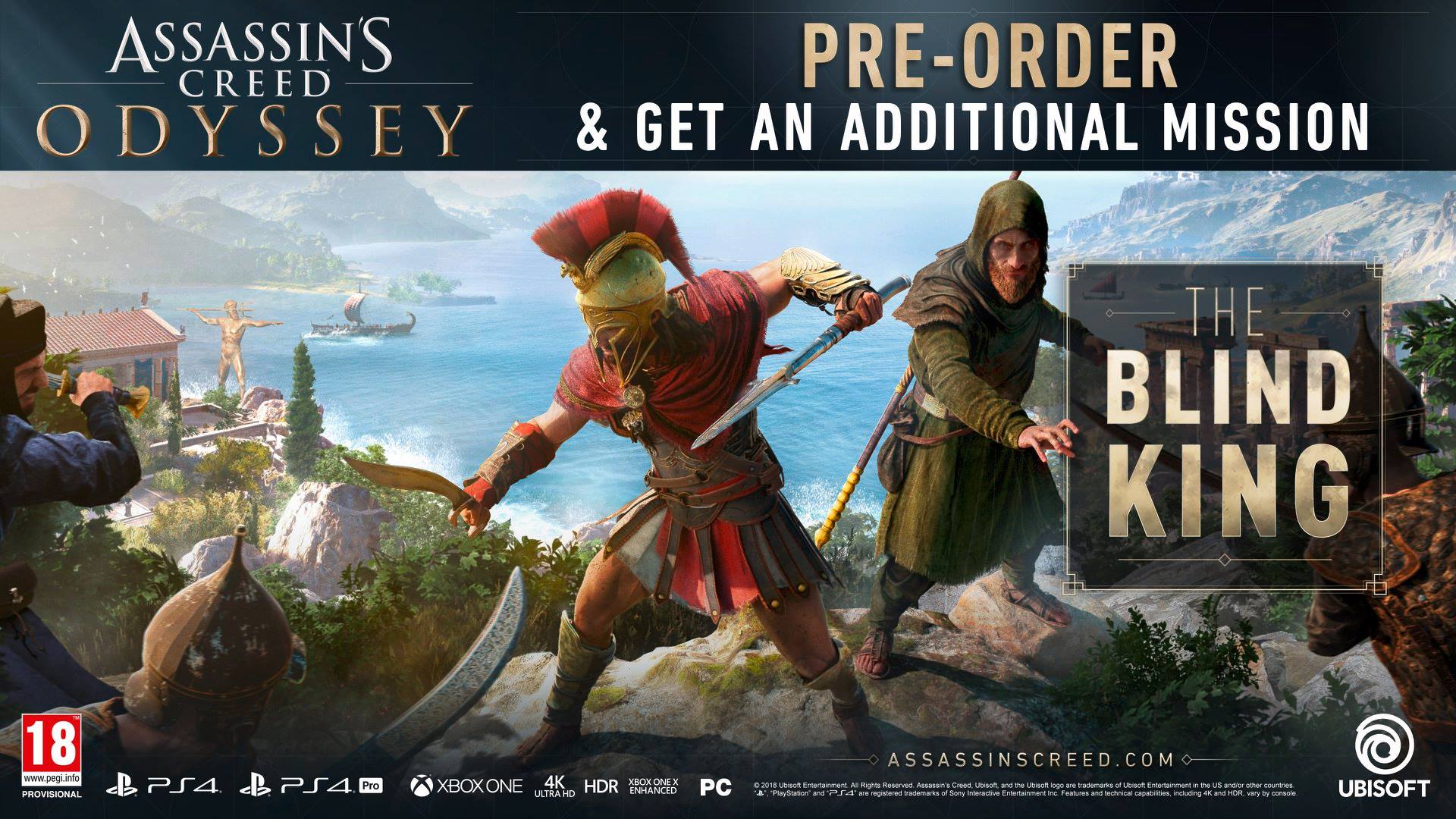 Picking up any of the editions of Assassin's Creed Odyssey, whether for the PC or console will net you a bonus "The Blind King" additional mission DLC. Strangely, details on the mission have been light and there actually have been theories and discussion surrounding who the "king" is that is being referenced in the DLC namesake. If you're a casual Assassin's Creed or history fan, then this is probably a moot point for you. While it is a bit annoying that content is being tucked behind a pre-order exclusion, based on experience in the past these DLC missions are made available for free through Ubisoft Club (free to join) about a month after the game is fully released. 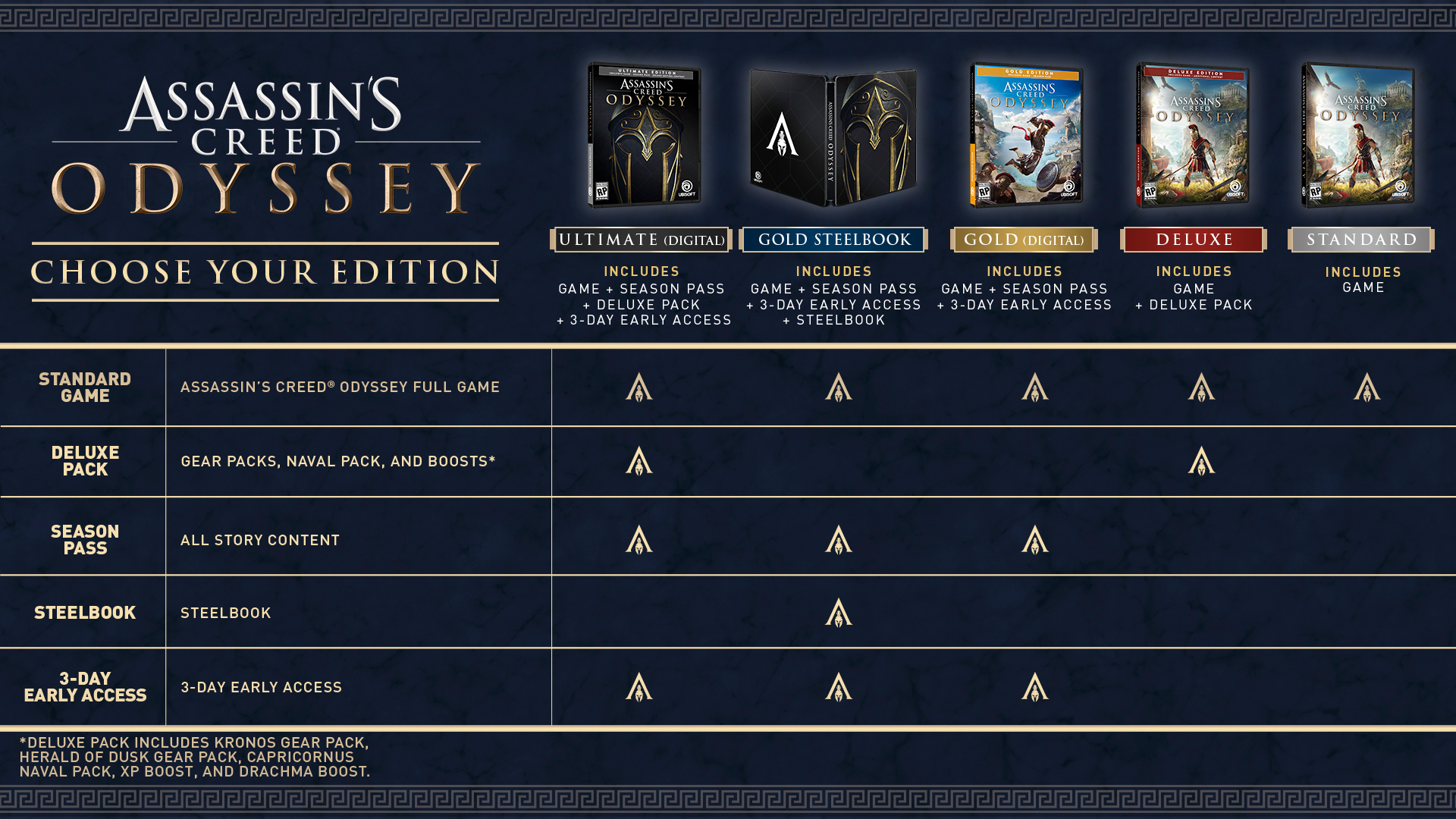 Ubisoft has taken money-grab to the next level, with Assasin's Creed Odyssey having four editions on launch (non-collector's editions). With list price as high as $120, you'd think you'll be receiving some sort of physical bonus such as a figure, statue, or other forms of collectibles. You'll be dead wrong as everything is digital.

For simplicity sake, we'll focus on the editions that are accessible to most gamers (the collector's editions are sold in limited quantity and only at select retailers). Here's the breakdown:

What's amazing is that unlike previous product segmentation, Ubisoft has decided to strip the generally cosmetic and in-game digital items from the Deluxe out of the Gold Edition. This means if you want the Deluxe in-game items, buying the Gold Edition is not enough. You'll have to buy the priciest Ultimate Edition.

Which Deal to Get?

Now that you know the edition break-downs, which version of Assassin's Creed Odyssey should you pick up? The best deal for Standard PC Uplay copy is currently at Razer Game Store for $48.28 (after using 10% off coupon). At 20% off, this is a great deal for release week. If you're positive you'll be playing Season Pass content - Gold Edition at $80 is also a decent price, especially as you'll be receiving the 3-day early access as well.

As for the Deluxe or Ultimate Edition? We'd suggest staying away - lease we encourage Ubisoft (and the rest of the industry) to continue this pricing strategy for in-game digital items. At the end of the day though, if you're a big Assassin's Creed fan and you have the disposable income, at the very least you can reap over $24 in savings by using the deals listed above.