Sushi’s delicious, it’s just too bad we love it so much that it’s driving the depletion of ocean habitats. However, that’s largely because the industry relies on non-selective fishing. Spearfishing might not get us the quantity we crave, but it’s much more sustainable. So good on Dave the Diver for being environmentally conscious.

The marriage of spearfishing and restaurant management is a tantalizing mix I didn’t know I wanted. Now I just have to deal with the constant cravings. 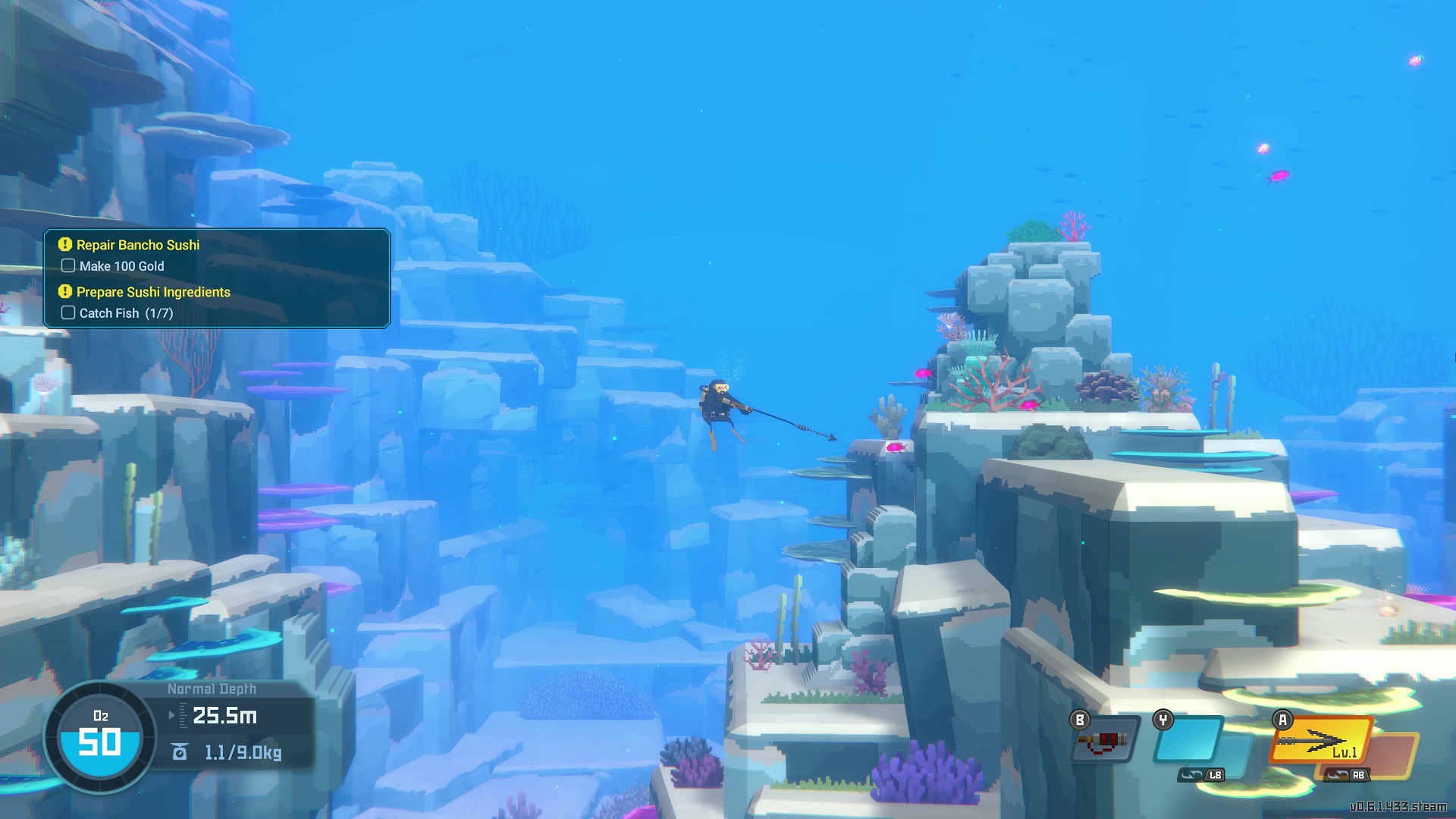 Dave the Diver stars the titular Dave, who is literally peer-pressured into managing a sushi restaurant. A friend of his found a lake that mysteriously contains fish from all over the world and has decided that people want to eat everything. So forget tuna and salmon; we’re talking about cuttlefish and anglers. Who knows what lies even deeper? Blobfish? We might have some blobfish nigiri.

Along the way, other people become interested in Dave’s excursions into the Giant Blue Hole and ask him to do them favors. Most of these are optional objectives that can get you gear and extra spending cash. There are also some non-optional quests that advance the story, which involves finding out about an ancient civilization that lived in the hole.

The day is broken up into three parts. You have time for two journeys into the depths during the day, but at night, you help run the restaurant. While all the managerial tasks are up to you, Dave also is pressured into assisting with the service. This involves delivering dishes and pouring tea. You can eventually hire people to help out – which is necessary because you’ll quickly find yourself swamped – but you’ll always want to lend a hand. No one pours tea like you do. I assume. It’s actually a cute minigame, and I suppose you could just keep screwing it up, but I have faith.

Fishing is a dangerous business, as you have to monitor the weight you carry, your oxygen supply, and your depth. Going too deep with the wrong suit will deplete your oxygen. While some fish you can hook without any effort, some require you to wear them down first or actually do battle. Beyond your spear, there are also guns that you get your hands on. Killing a fish is less efficient than speering them, but sometimes that’s just not an option.

If you die, you’re returned to the surface, and you can only choose one prize to take back. It’s very easy to get overconfident and return to the surface belly-up. To prevent this, you can spend your hard-earned tips on better gear that help you dive further, longer, and safer. You also find blueprints for additional weapons to power yourself up. 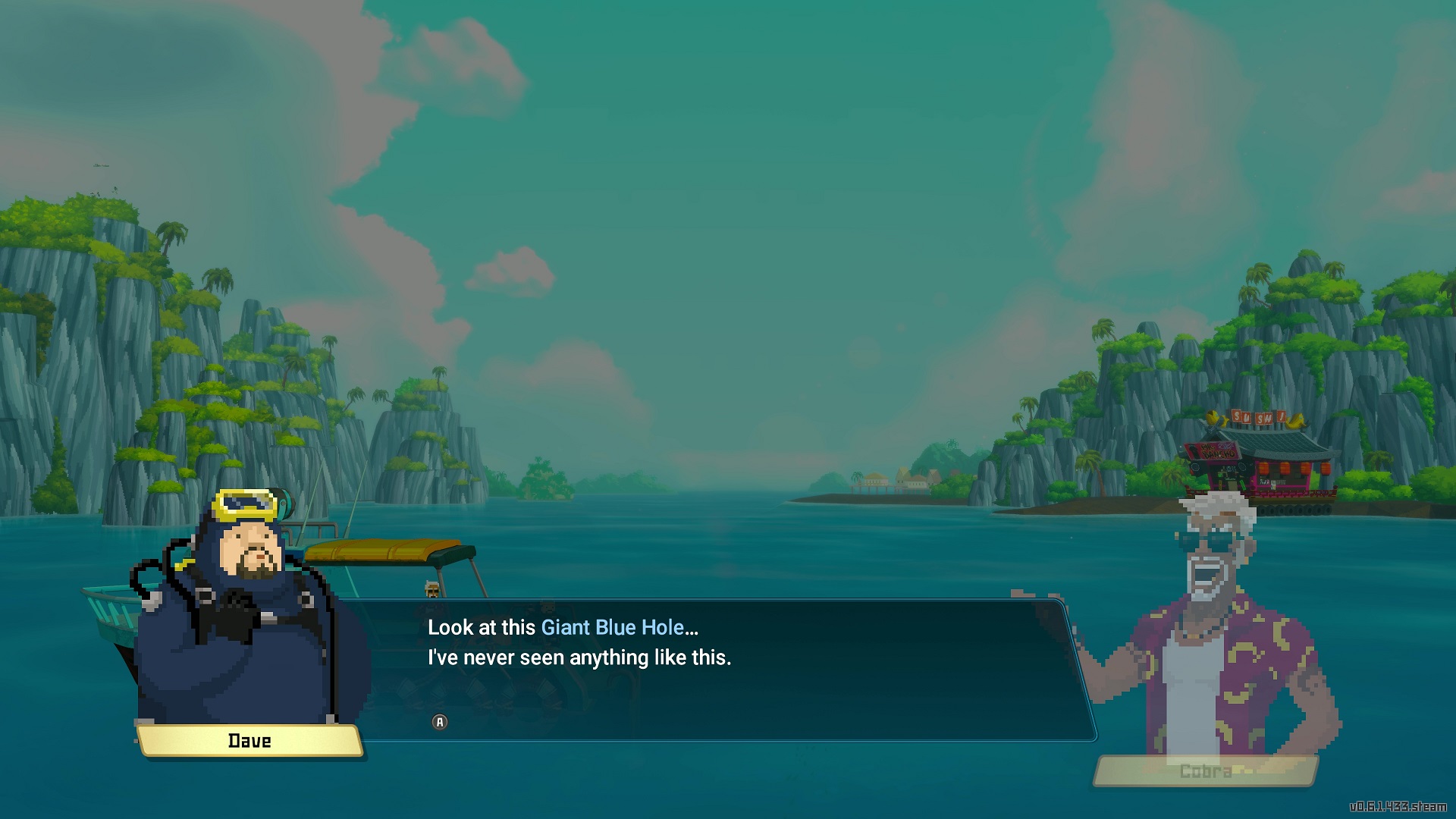 I’ve played quite a few of these open-and-upgrade business sims this year, and I’ve found many of them to be quite shaky. Even though Dave the Diver is starting its life in Early Access, I didn’t have that problem, whatsoever. It actually struck me as an incredibly solid title. I came across a few bugs, and the balance needs to be tweaked, but the only real giveaway that it’s not finished is that it cuts short.

It also nails a great gameplay loop. The obvious draw to the game is the fishing, and it gives due attention there. A night at the sushi restaurant is rather brief; it’s almost just the payoff for a hard day fishing. The goal may be to build up the business, but Dave the Diver seems to recognize that work is work. You get to see growth rather quickly. You get a sense of what you need to build towards without having to see everything play out in slow motion. I’m honestly impressed by how much thought went into creating an entertaining balance. 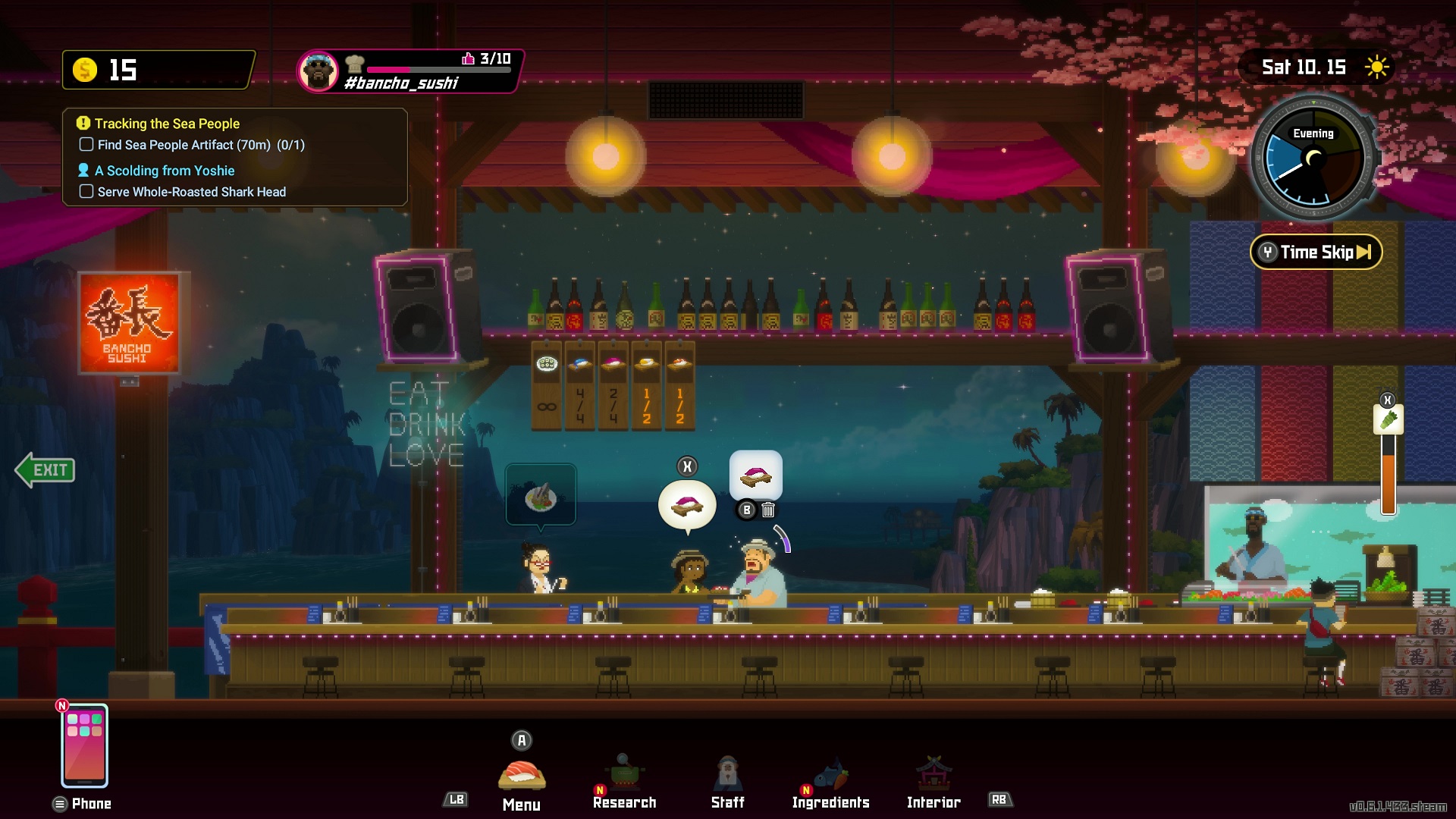 Beyond that, I’m just excited to see where the game goes. It frequently hints at some spooky stuff below, and I can’t wait to see what horrors get thrown across some rice. The narrative doesn’t show much sign of getting very suspenseful, but a lot of surprises could still be in store.

The developer’s goal is to launch Dave the Diver fully sometime in early 2023. Judging by what’s currently on offer, that seems like a realistic possibility. Rarely have I seen an Early Access title that has everything so neatly in place already. The planning for the game must be ridiculously solid because, even at this time, there’s a bright, glossy polish on everything. I think only catastrophe could really derail this project, so for now, I can’t wait to dive in deeper.

[This scoreless review is based on an Early Access build of the game provided by the publisher.]