Gintama is finally getting a pure action game

If there is one anime that deserves to have a dedicated action game, it's Gintama. For those unfamiliar with the anime and manga, it's basically a mostly comedicRurouni Kenshin (Samurai X) but with Space Aliens instead of Westerners ending the age of the Japanese samurai. Don't let the space aliens part turn you away, they completely forget the space aliens part later in the show/manga.

Fans of Gintama have had the chance to see the lead character Gintoki in action games such as Jump Ultimate Stars and J-Stars Victory VS (and a guest costume in God Eater 2 that the west never got) but a new game revealed in this week's Jump Magazine promises to be the first pure action Gintama game. Dubbed as PROJECT "Last Game", this new Gintama game promises to have "Super Beautiful Modeling" and "Serious Quality". While those claims seem like bad translation, Gintama fans might think of it as sort of as a joke of sorts, since saying such in an announcement with little to show is just rather silly.

This Gintamagame will be released on the PlayStation 4 and PlayStation Vita. No release date yet and more info to come in the future.

Gintama is indeed a comedy most of the time but when it gets serious, expect a four to six episode arc that contains plenty of great action and character development that a Dragon Ball Z or Naruto can only achieve in 20+ episodes.

Note: If you plan to watch the anime, skip the first two episodes which are bad filler meant to introduce the large cast. 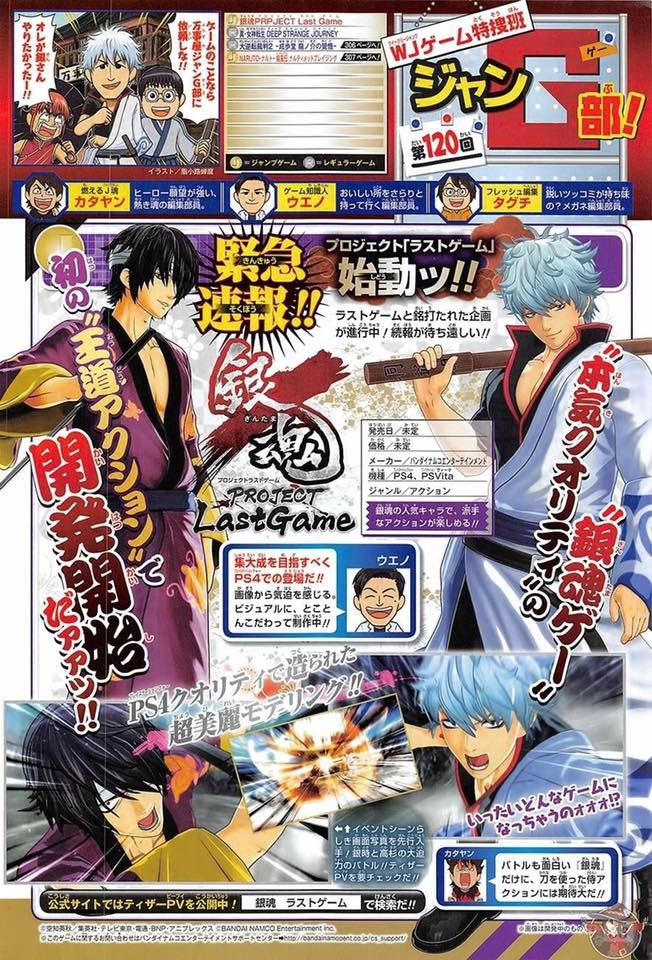