Mario + Rabbids Kingdom Battle is straightforward, but I don't even mind

Some folks don't mind the Rabbids and, in fact, actually enjoy the hyperactive goofballs. That's not me. Not in this life! I'd rather they do their thing, and I do mine. But I'll be damned if Ubisoft hasn't come up with something compelling in Mario + Rabbids Kingdom Battle. The game's basically Mario XCOM, y'all. Those madmen did it.

It plays like it looks, which is to say "surprisingly well." Far better than I would've thought based on the crossover concept and who's executing it.

This wouldn't quiiite pass for a major in-house Nintendo-led Marioproject, at least not to my eyes, but Kingdom Battledoes have a good helping of secret sauce, that heightened attention to detail and polish we're trained to expect. According to a Nintendo representative, Shigeru Miyamoto consulted on the game. It shows.

Our hands-on time at E3 was a brief but sufficient 20 minutes with Kingdom Battle.

I roamed the map as a Roomba-looking fellow with Mario, Rabbid Peach, and Rabbid Luigi trailing behind. This early portion had linear pathways from one battle to the next, aside from a nice diversion in which I nabbed red coins in a maze with hidden walls popping out of the ground, forcing me to find alternate routes.

The battles, too, were simple to start. I'd plop Mario and co. behind cover (with a control scheme that works well with a gamepad), fire off faux Mega Busters, and hope that my long-range 50% hit chances landed. In turn, the "bad" Rabbids would rush me down for a melee strike, return fire, and, hilariously, go after Mario with extreme prejudice.

Seriously, they beat the shit out of Mario. I mean, I did set them ablaze with conveniently-placed explosives, but c'mon. Show some respect for the overworked plumber. 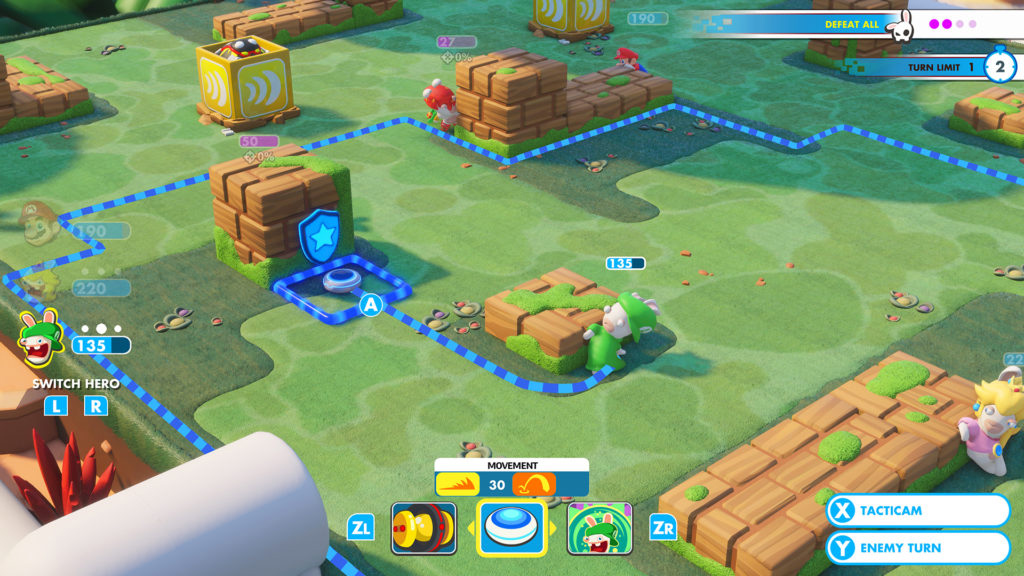 Some larger brute Rabbids squished Mario in a later fight, knocking him out of the battle, but that didn't spell failure. I got the heck outta there with Rabbid Peach, ducking into a pipe that spat me out on higher ground near a glowing zone (which was essentially an extraction point, as it turned out). That did the trick. I'll be curious to see how tough Kingdom Battlegets, but my sense is that it won't be a cakewalk.

I didn't dig into any customization aside from buying Mario a different weapon with slightly better stats, and also didn't get to check out Kingdom Battle's co-op stuff. Again, this was a limited, early-game slice.

Still, I had fun tactically shooting Rabbids in the face as Mario. That sure felt cathartic. I'm hopeful the full version turns out as well as this preview build suggests it will, and that the combat can sustain itself across the whole adventure. If so, this'll be a real good time and a particularly welcome addition to the Nintendo Switch library.