Lara Croft is one of video games’s biggest icons. Even those not familiar with the wonky original 3D titles or the recently rebooted series know who Croft is, even if they can’t recognize her, or tell you what she’s like. This is what it means to be an icon. Your image and name are so pervasive throughout culture that it’s almost too easy to find someone who can recognize what your name means.

And, as with most icons these days, there’s a new movie out now, succinctly called Tomb Raider.It heavily draws on the images and the allure of the games to translate the experience into a movie, but it is not fluent in the language. This new Tomb Raideris fun at times, and mildly interesting at others. In the end, however, it fails to recreate the experience of the games.

The first thing you’ll notice about this new Tomb Raideris that it pulls most of its elements from the 2013 Crystal Dynamics developed Tomb Raidergame. The storyline is eerily similar as well. Lara (Alicia Vikander) is stranded on the mysterious island of Yamatai after her ship the Endurance sinks due to particularly harsh conditions at sea. Set-pieces from the game are repurposed, as are the over-the-top ludicrous amounts of damage that Lara can take without dying horribly. Seriously. There are moments here that nearly rival the now infamous rebar fall from the 2013 Tomb Raidergame.

The weakest element of Tomb Raider is how hard it leans into the games. During action sequences, story moments, and everything in-between, I couldn’t help but see how much was ripped straight from the recently rebooted games. Vikander’s Lara has the exact same outfit and weapons. Several action sequences were simply re-purposed in movie form, as was the outline of the plot. And the new additions are mostly unwelcome, mainly because they fiddle with Lara’s characterization that the rebooted games got so right.

That means the story in this Tomb Raiderisn’t anything to write home about. There’s an attempt to throw a few interesting twists and turns into the film, especially regarding the realism of the more mystical elements in the Tomb Raiderseries. But it doesn’t hold your attention. It’s a decent excuse to have Lara Croft and sometimes Lu Ren (Daniel Wu) get thrown into thrilling action sequences, but not much more. 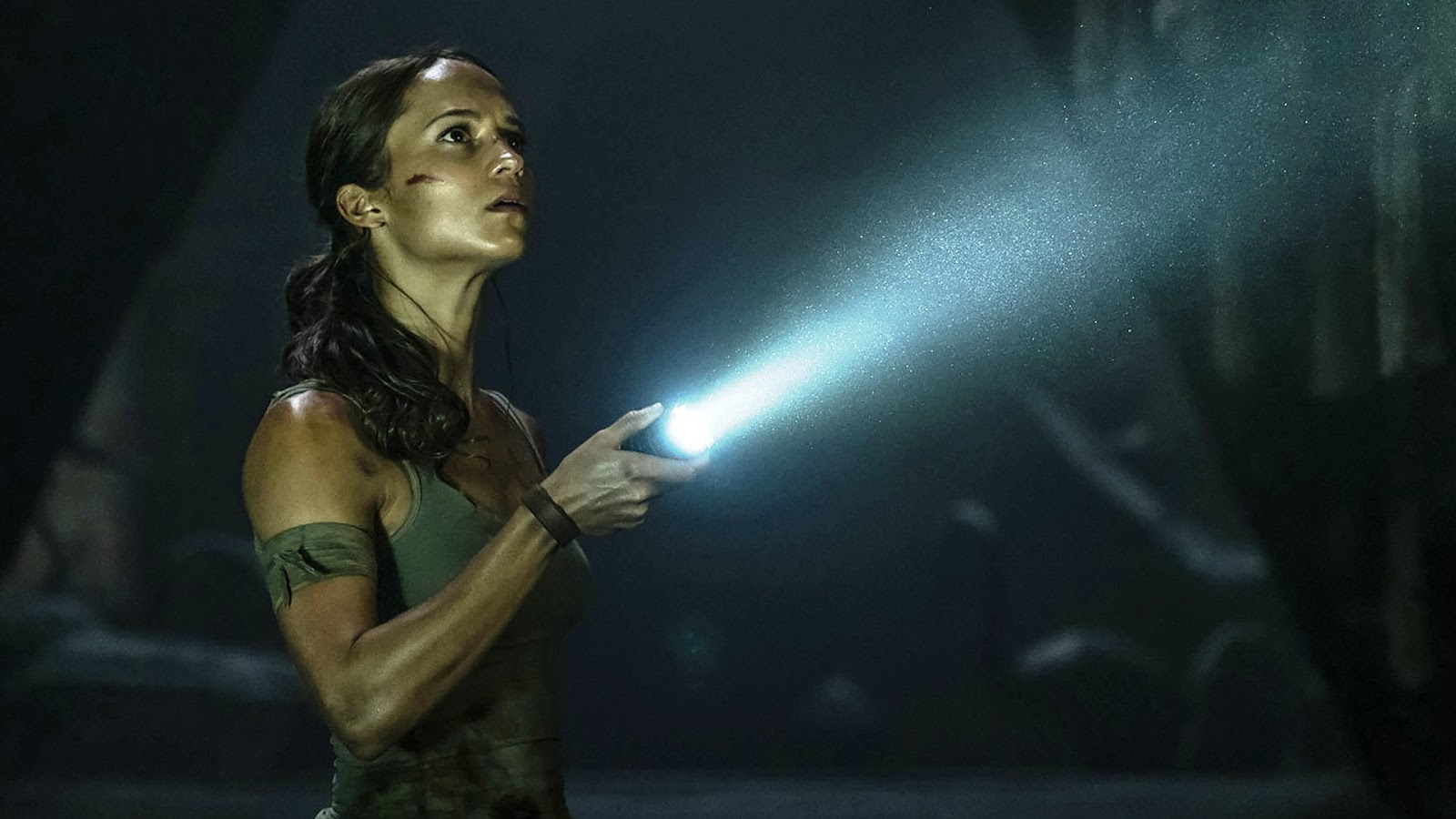 And hey, isn’t that why we’re here? This is Tomb Raider after all, not an intricately crafted character drama. There isn’t that much of a need for an interesting story. However, the audience does need to latch onto something. That something is Lara Croft.

Unfortunately, Lara’s character has comparable structural integrity to the derelict planes she loves to jump from.  She consistently wavers between being a puzzle-solving master and complete moron, who throws herself into unnecessary danger whenever she pleases. Her strongest points of characterization come before she arrives at the island. Her time in London shows that she’s at least alert and reasonably smart in her job as a courier. Yet once she encounters real danger on Yamatai, that characterization goes right out the window. She does incredibly stupid things that stretch the believability that she’s a real person.

I’m coming across a bit negative, but this really isn't that bad of a movie. For starters, most of the acting is decent. Vikander comes across as wooden at times, but can add a touch of color to her lines that eases her right into the role. Wu also provides a much-needed human element, being the more skeptical and relatable character in the midst of the havoc wreaked by Trinity. Walton Goggins performs well as our main villain Mathias Vogel, feeling just intimidating enough to give this movie stakes -- aside from the world-ending consequences if Lara were to fail. 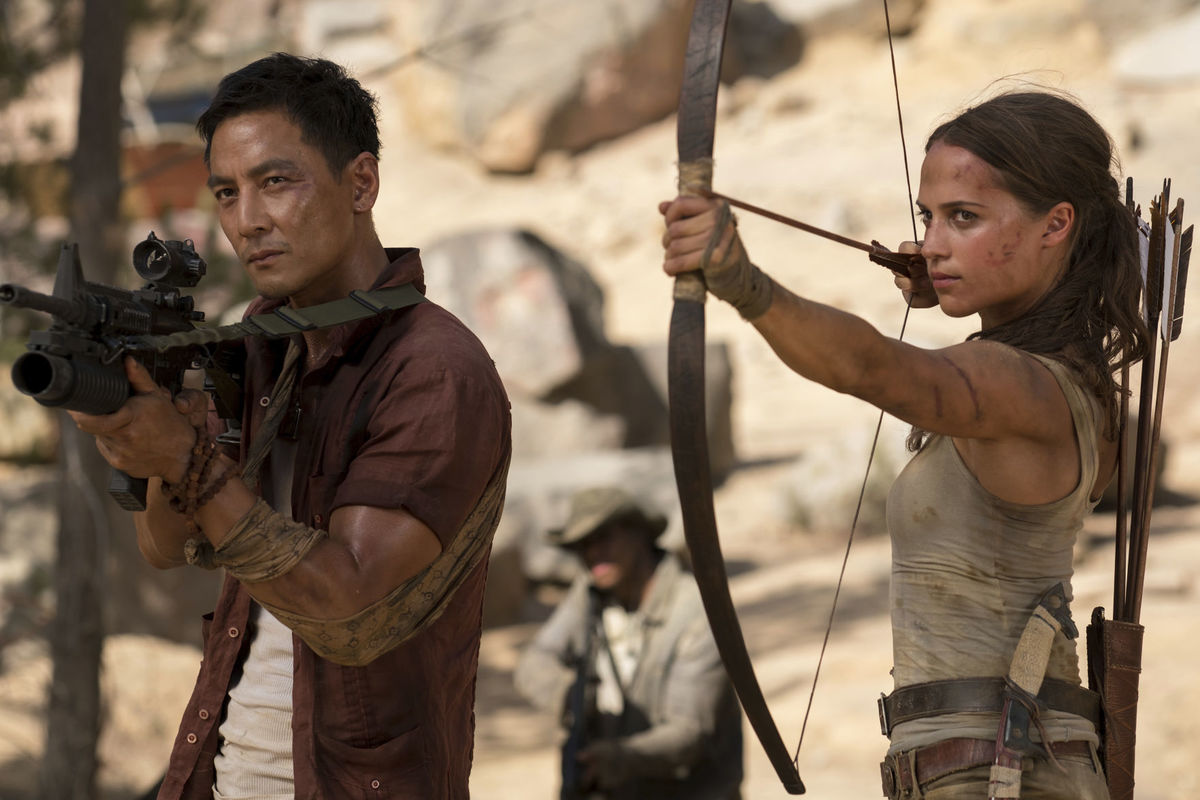 The action scenes are pretty fun as well. As much as I cringe at the tremendous damage Lara suffers through, these escape sequences and incredible feats are just as fun as they were in the game. Getting whipped through trees, falling into rivers, and loosing arrows into goons is all good, mindless action. It isn’t overly choreographed, and when Croft hacks into someone with a climbing axe, the visceral satisfaction is incredible.

It is somewhat undercut, however, by the lack of convincing effects for the more elaborate set-pieces. Wide shots without any CGI look crisp, but as soon as effects are involved, the image becomes fuzzy and disconnected. I liked a lot of the action shown onscreen, but at times I felt the need to squint at the movie to make out any sort of detail. Instead of clear action, we’re treated to a jagged image that evokes the poor CGI of Indiana Jones and the Kingdom of the Crystal Skull.

I’m not sure how I feel about this Tomb Raidermovie. For a video game movie, it avoids being a complete disaster like the recent Assassin’s Creed movie was. The action is exciting, and the acting is far better than what we’re used to getting in these kinds of movies. However, there’s no discernible reason to see this movie over playing the game. This movie has several screws loose that the game already had bolted in, and the flaws in this movie hold it back from becoming anything special. Tomb Raideris an enjoyable, if forgettable, action flick that won’t offend and won’t impress.